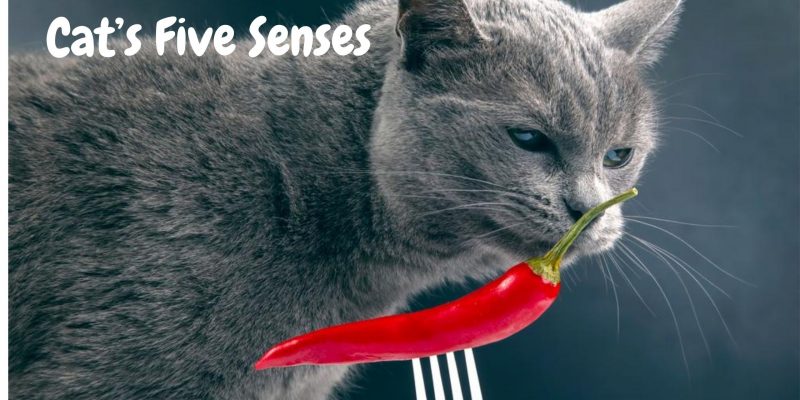 The cat’s five senses include taste, vision, touch, hearing, and smell. These senses vary in intensity with ours.

One of the first cat’s five senses is vision. The cat has eyesight 6 times sharper than humans. In bright sunlight, the pupils narrow to narrow clicks. In low light or the dark, they are large and round. The cat uses the slightest glimmers of light. Her twilight vision is very sharp. For a long time, the prevailing opinion was that the cat sees everything in gray. In the past decade, after many experiments, scientists have concluded that a cat distinguishes between six primary colors and 25 shades of gray. And the favorite color of most of them is red.

The ears perceived acoustic stimuli not only, but also through the nerve cells of the eyes, which can hear (!) and transmit signals to the brain.

Here is a tiny ant crawling six meters away. It is indistinguishable from the human eye. But nothing escapes the cat wandering around the garden. The development of a cat’s vision is simply fantastic. One glance–and she “grasps” everything that moves. She, for example, simultaneously sees a bird jumping to the right along the branches of a bush, a bumblebee sitting on the left of the flower, and also that same ant, located a few meters from it. It was verified that if the mistress passes by at a distance of one hundred meters, the cat will recognize her by only one shape.

Cat’s eyes, incomprehensible and mysterious, are just a miracle. They glow in the dark, because the small nerve endings-sticks in the retina especially react to a small light stream, “clarifying” the image. At dusk, the cat sees six times better than a person. The pupil, resizing, regulates the flow of light.

The cat’s eye has a third eyelid. It is located in the inner corner of the eye. For cat owners, an enlarged third eyelid is an alarm, as this may result from a disease–for example, severe exhaustion.

The cat is the owner of huge eyes. Among all domestic animals, the cat’s eyes are the largest in comparison with the size of its own body. And if the size of the eye in the human body was the same as that of a cat, the human eye would have 20 centimeters in diameter!

The second cat’s five senses are smell. A cat cannot exist without a world of odors. Having lost sight and hearing, she will adapt to life, having lost her instinct–never, she is doomed to death.

Besides the nose, the cat has an additional sense of smell, the Jacobson organ,–these are two narrow channels that begin immediately after the upper incisors and continue in the sky into the Stenson channels. To use it, the animal lifts its upper lip and opens its mouth, drawing air through the mouth into the nose, as if tasting the air. The functions of the Jacobson organ have not yet been studied, and there are several versions of its use.

First, it is believed that this organ is adapted to perceive the smell of food and supplements the information about it got by the organ of smell. The cat, besides the nasal, also has a mouth smell.

According to another version–it serves to perceive sex pheromones. It is used to search for a sexual partner.

Supporters of the third version believe that this body can detect the slightest changes in the chemical composition of air and attribute it to the “sixth sense”, which allows the cat to foresee such natural disasters as an earthquake and volcanic eruptions.

Although the cat’s sense of smell is much finer than ours, the dog is a great specialist in this respect, because it hunts mainly with the nose. The sense of smell for a cat is important in another area–contact, the exchange of information with others. What people with words and gestures, cats affected by labels, and control of their odor? Cats practice this exchange of courtesies in a very characteristic way. They leave an odorous stream of urine and spray places with the smell of their rivals and cats living in the same territory, acting with enviable endurance and constancy.

Cats leave significantly less harsh odors with their odorous glands on the paw pads. What inspires a cat as “Chanel No. 5” is imperceptible to us. The cat rubs his neck and cheeks with an absolutely enthusiastic look where his sympathy was strolling, expressing his hidden sexual or militant mood. These movements of cats are not identical to the way they rub their cheek against a person. When a cat deals with a person, he thus shows his location.

In cats, the smell of certain plants, such as mint and thyme, for example, has a very strong stupefying effect. Stupefies pets and elderberries.

The third cat’s five senses is touch. Even in absolute darkness and silence, when the cat cannot navigate in space with the eyes and ears, she is not helpless; she has tactile vibrissa hairs. Whiskers act as highly sensitive antennas and provide invaluable help in the cat near the orientation. They are located above the eyes, on the upper lip, cheeks, chin, and on the underside of the anterior Lanka. These hairs are very hard and thick, their roots are in the skin much deeper than the rest of the hair and are richly innervated, that is, a huge number of nerve endings penetrate the root of the hair.

Vibrissa on the face is specially developed, they are usually called a mustache. The mustache is located above the upper lip in four horizontal rows. The most powerful and longest mustaches are in the second and third rows.

A cat’s whiskers are not a decorative element–they perform vital functions. Thanks to them, the animal receives a wide variety of information. The mustache is incredibly sensitive to the slightest irritation and picks up air vibrations. They don’t even have to touch objects, but it’s enough to catch the air currents that arise when the cat approaches various obstacles. The slightest vibration of the tip of the hair is transmitted to the root, where it is perceived by the sensitive nerve endings, which immediately inform the brain about it.

In facial expressions, a luxurious mustache plays an important role. A cat can push them forward in pleasant anticipation of affection or an angry snarl pressed against the face.

The tactile hairs of cats are like sensitive antennas. Using the hair of a cat, the information received is recorded, which is sent to her brain, that is, a natural feline oscilloscope works. Thus, the cat examines its hunting territory with infallible reliability.

Vibrissae and tactile hairs do not fall out with the hair during hormone-induced molting. They are lost singly and continuously restored. Under no circumstances should vibrissa be trimmed!

Sometimes cats-mothers get bored with the vibrissa of their babies and they gnaw off the little “antennae” of the kittens. Whether this makes any other sense is not yet known for certain. Perhaps the cat thus wants to prevent the fact that some overly curious kitten does not get out of the “nest” too early. 5-6 months pass before the baby regains its normal “mustache”.

The fourth cat’s five senses is hearing. Cats have a great ear! Nature endowed their hearing organs with amazing abilities: they can filter out from all everyday noises those that the cat considers the most important (for example, the sound of the owner’s footsteps). And even in their eyes, as already mentioned, there are nerve cells that transmit noise inaudible to us, to the brain. For us people, the “silence of nature”, for a cat, is a real concert of rustles, rustles, buzzes, and crunches — 27 muscles “tune” both ears, independent of each other, in any direction. There is a small fold of skin on the edge of the ear, and there is speculation that this is nothing but a resonator.

Besides the fact that the cat’s hearing is much finer than that of a human, it still perfectly deciphers the “language of mice”. Mice communicate using sound signals in the 40 kHz region. Cats easily catch these “mouse talks” and always have accurate information when the mouse is about to leave its mink. The following data is presented: the lower threshold of the sound range is 30 Hz, the upper is 60-65 kHz, and for 10-day-old babies, the upper limit is even higher–100 kHz. By comparison, the dog reacts to the sound frequency of about 40 kHz, a person can capture the sounds of a frequency of 20 kHz.

The cat’s hearing, although very subtle, is selective: her ears respond only to those sounds that are of any interest to her. If the sound is loud but familiar, the cat will not even wake up, but if the stranger, although very quiet, will immediately beware, listen.

The cat’s sensitivity to sound volume is 3 times higher than that of a human!” If we listen to loud music or the TV rattles in the room, we should give the cat the opportunity to go to another room.”

The fifth cat’s five senses is taste. The taste organs distinguish between acidic, salty, sweet, and bitter substances. Cats recognize bitter and salty substances and, worse, sweet ones. This, but apparently, is because they live prey to the wild ancestors of the domestic cat and had a bitter and brackish taste of blood and meat.

The cat’s tongue, like ours, has taste buds. And the cat is extremely picky about the taste and consistency of the food offered to her. It is a pedantic client industry for the production of animal feed. Typically, a cat is offered 10 flavoring directions, from which she, having tried, recognizes (if at all recognizes) usually two or three varieties.

On the upper side of the tongue are small horn hooks, which are perceived as rough sandpaper by human skin. From licking with this rasp tongue, our skin will turn red after just a few touches. Horn hooks clean and licks the cat’s hair, helping the cat cope with a large piece of meat, scraping individual fibers.

The cat does not lap up the water with a flat tongue, but gives it the shape of a small groove and quickly captures the liquid and sends it into the mouth.

BODIES OF FEELINGS AND ABILITIES OF THE CAT

Cat’s five senses work together in many settings. The ability to find your home. The cat’s eye can not only perceive optical stimuli in a wide range, but it also responds to acoustic signals. Cats perceive the exact sound picture of their surroundings. The “register” various noises (the sound of bells, factory beeps, animal voices, the noise of work in a peasant’s yard, etc.). They determine the noises’ remoteness, volume, and angle of incidence of sound, perceiving this optical-acoustic picture as their home environment. A cat, lost in the countryside, will try to catch especially expressive noises, the familiar rustles of her house.

Are you curious about the age of your cat? Use our cat age converter.