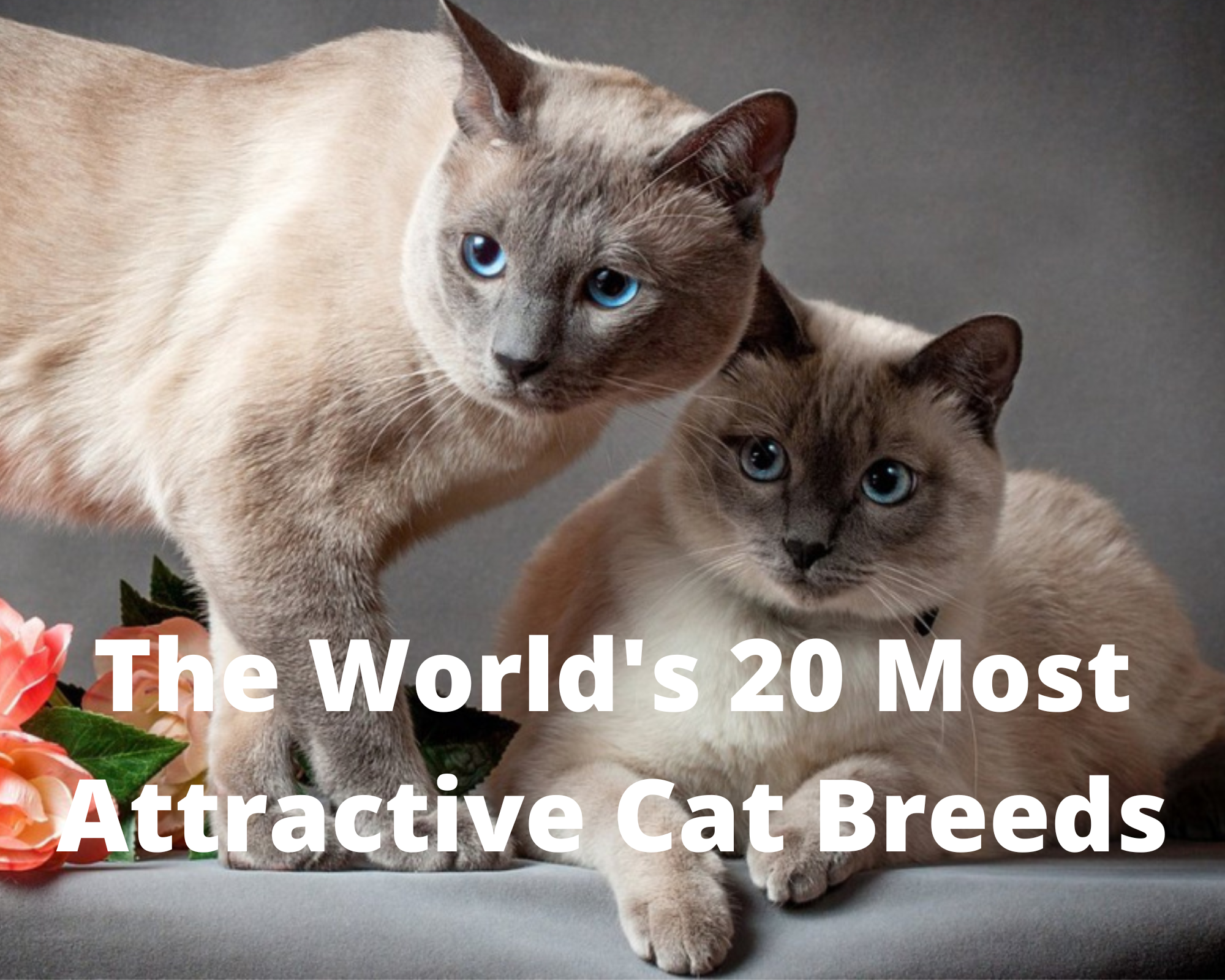 Cats are beautiful creatures. The epitome of natural elegance, beauty, and sophistication. Cute, quiet, polite, and capable of extracting their claws if necessary.

These intelligent, independent, and loyal creatures quickly capture hearts: they make fantastic friends and companions for people of all ages.

There are over 200 officially registered breeds of cats worldwide, each with its distinct beauty. However, among this variety, some distinguish out for their luxury, captivating appearance, and intriguing personality.

We’ll tell you about the 20 most gorgeous cat breeds that will astound and enchant you. We will also discuss the traits and exterior features that distinguish these species. And, of course, we will show the images of the breeds and their names.

This kind of cat has an expressive and elegant appearance. Their white fur is usually long and velvety to the touch, and they have large fluffy tails.

Although black, blue, tabby, and smoked colors are also available. Angoras are quick and adaptable. Their bodies are muscular, and their legs are long and slender.

The muzzle of this breed is short and elongated, with large blue or amber eyes and pointed, tidy ears. Different eye colors are standard in Angora cats.

This cat can be regarded as elegant and majestic. The breed has a rich undercoat and a short, silky coat. Light blue with a silver sheen is the most common color. However, there are also black and white cats.

Russian blues have beautiful almond-shaped green eyes and long, pointed ears. They are known for their calm and reserved demeanor, yet they are also quite agile and active.

The Persian cat is a type of soft hairy cat. This breed is only adapted to household conditions.

Persian cats have long, luscious hair, a beautiful bloated tail, enormous round and wide eyes, and a small nose. They have a muscular build, a large neck, and tiny legs.

These cats have the squinty, quiet, and thoughtful expression of one of the all-knowing sages. They are friendly and easy to talk to. They adore being petted and stroked.

A magnificent and ancient breed. These short-haired cats have an unusual coloration that sets them apart from many other species: the body has a light, smooth coat and long legs, while the tail, ears, and nose are painted a darker color (usually chocolate).

Siamese cats have almond-shaped blue eyes, pointed ears, and a straight nose. They are also slender and sophisticated—mannered and confident at times, yet gregarious, social, and energetic animals in general.

These lovely cats resemble lynxes with their characteristic spotted hue, short tail, grace, and pointed ears with tassels. They have a pear-shaped head, a pronounced chin, gorgeous almond-shaped eyes with a pale rim, sideburns, and huge limbs.

The Pixie Bobs have a balanced, easygoing personality. They are devoted, active, patient, strong, and even shy.

An uncommon breed with a distinctive appearance. They resemble elves due to their small muzzles, round eyes, and massive ears.

It is a breed with short hair. Their coat is silky and curly and can be monochrome, dichromatic, or trichromatic.

The webbing between the toes is a distinguishing feature of the Cornish Rex. This enables them to swim perfectly, despite their dislike of water.

Their heads are short and spherical, with a broad muzzle. The figure is slim, muscular, and graceful. Bombay cats captivate people with their stunning looks and mysterious temperament. Extremely agile, gentle, and sociable. They enjoy “telling” their owners stuff.

This breed of cat is among the largest. They can grow up to one meter tall and weigh between 4 and 10 kg.

Maine Coons are majestic and self-sufficient. They have vast heads and sturdy, solid bodies. Their appearance, stately demeanor, and unusual muzzle are reminiscent of tigers.

Their hair is long, fluffy, glossy, and smooth. Colors may differ.

The eyes of Maine Coon cats are brilliant and almond-shaped. The cats have huge tasseled ears and a lovely melodic voice.

A highly graceful and slim breed. Their fur is short, silky, and velvety soft. Each hair is dyed with different colored bands. The hue is typically red with a brick undertone.

Abyssinia has a slim and lovely figure. Small, tidy head with almond-shaped eyes. Ears that are large and occasionally have tassels.

This breed has a lovely, soft, and delicate appearance. Their coat color varies and is like that of Siamese cats: the body coat is lighter, but the legs, muzzle, ears, and tail are darker.

Burmese cats have large bodies with tiny legs. Their fur is soft and loose. Its vivid blue eyes and white paw tips distinguish the breed.

The Siberian is the first of the top ten most beautiful domestic cat breeds. They have various colors: spotted, ashy, gray, and marbled. As a result, Siberian cats are sometimes confused with other cat breeds.

These lovely creatures have fluffy, long, velvety fur that is hypoallergenic. Siberian cats are likewise giant breeds with muscular bodies, although slim. Their lengthy hair between the pads distinguishes them.

The Prionailurus bengalensis cat breed is lovely, captivating, and wild in looks. Their luxuriant, smooth, and shiny coat, with a spotted or marbled look, adds to their allure.

Ragdoll cats appear to be stylish and significant. They are relatively enormous, but they move quickly and softly. They are affectionate and friendly.

Ragdolls have muscular, well-developed bodies. Their muzzle is large and deeper in color than the rest of their body, giving them the impression of a mask.

Their coat is bushy and silky, forming a fluffy collar around the neck. Ragdolls have wide oval eyes and small ears, which may or may not have tassels on the tips.

One of the most adorable and adorable breeds. A clean round nose, huge round owl-like eyes, small frail ears, and a short, soft, smooth coat distinguish the Scottish Fold.

Toyger cats resemble miniature tigers. Their coat is short, loose, and lustrous, with dark stripes on a golden red backdrop.

The toyger’s head is long, with a pronounced chin, a long snout, and well-placed ears. Their eyes are small and deep-set, with a stunning amber and green color. The body is slim, graceful, and muscular. The tail is lengthy and robust.

These domestic cats range in size from medium to large. Their look resembles that of lynxes and Maine Coons.

The Norwegian Forest Cat has a long, luxuriant coat with a dense undercoat. It creates a mane, collar, coats, and sideburns.

The body is robust and adaptable. The skull has a trapezoidal form and a massive chin. The ears are pointy and have tassels on the tips.

The hue of the Norwegian Forest Cat, as well as the color of its huge round eyes, can vary.

A unique and commanding appearance. It has a medium-sized body that is sturdy and solid.

A wedge-shaped muzzle, huge round ears, a long nose, and large oval eyes distinguish American Curls from other breeds.

These cats have a long, silky, luxuriant coat that is velvety. The tail is bushy and long. In addition, they are friendly, playful, and active.

Long, thin necks characterize them, neat features with high cheekbones and broad chins, pronounced noses, pointed ears, and large, round, emerald eyes. Nibelungs have incredibly fluffy tails with fur longer than the fur on their bodies.

A genuinely exceptional breed. These magnificent cats have a stunning ash color, silver tinge, and a noble personality. Their hair is magnificent – thick, silky, and loose.

Their large torso and short legs distinguish these domestic cats. They are also comparable to the Dachshund.

Although not as graceful as other cats, they are attractive, humorous, and charming. They feature a round muzzle, short pointed ears, and an entire, rounded body.

The coat of the Munchkin can be short or lengthy. It’s pretty soft and loose.

This breed’s cats are graceful, regal, and magnificent. They have a muscular build and are robust and sturdy creatures.

The color is white, but the head and tail are different. The coat is smooth, plush, and oversized. Turkish Vans have a particularly bushy and lustrous tail.

They have an extended nose, broad ears, and expressive almond-shaped eyes in blue or amber (sometimes the eyes can be different).

They are medium in stature, very energetic, intelligent, and affectionate. They have an intriguing trait in that they enjoy playing with water and swimming.

Each of the breeds described above has characteristics that distinguish its members. And they all share characteristics such as noble appearance, intelligence, innate adaptability, and independence.

Any cat, regardless of breed, deserves the title “beautiful queen.”