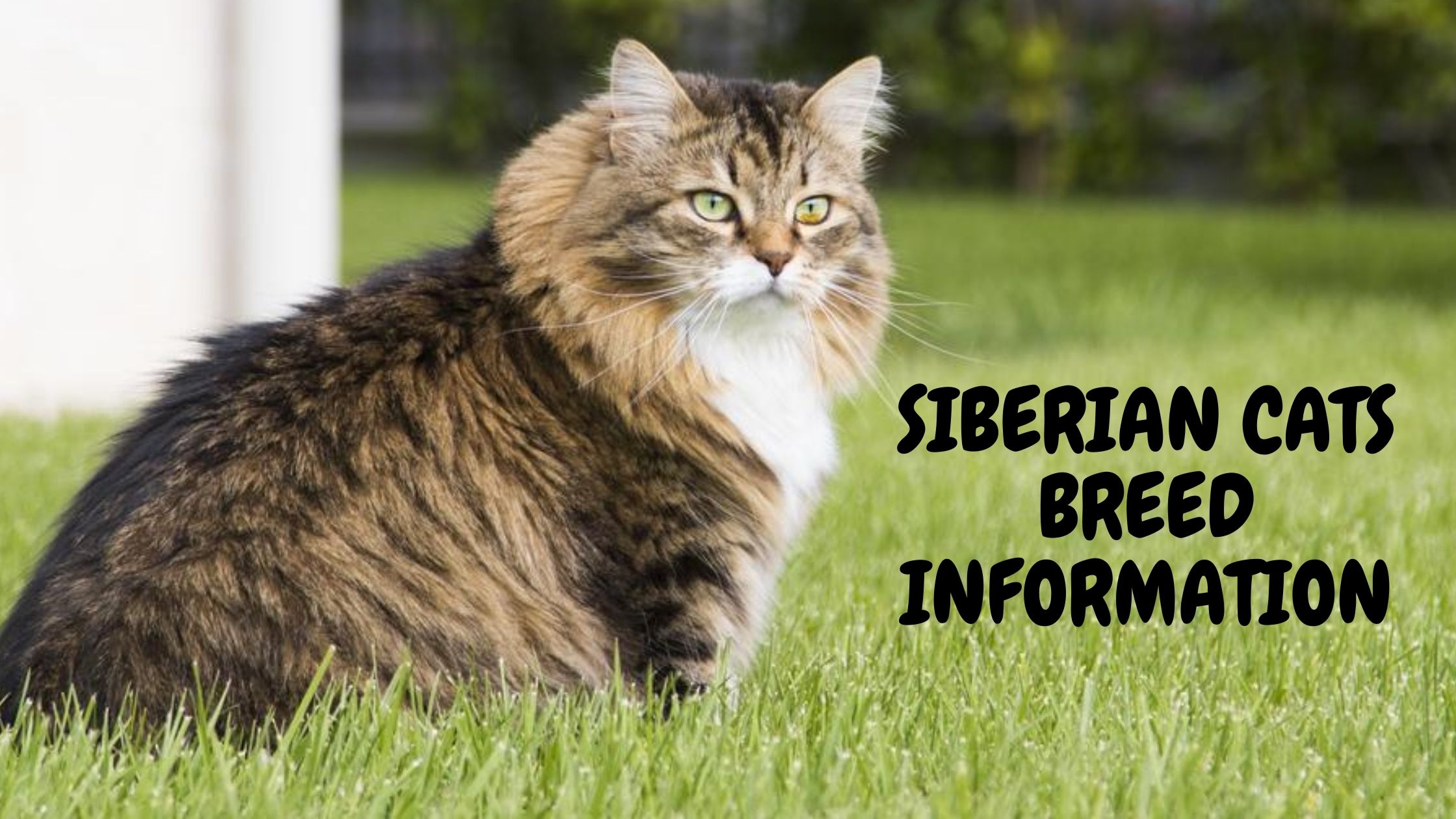 Siberian cats originate from Siberia, which is a beautiful and wild country. The cats have lived in Siberia’s expansion of Russia. They were introduced in the United States only two decades ago; despite they were brought a long time ago from there. That’s why Siberian cats are still rare in the US, and therefore you may need some expense and patience to meet and adopt them as a pet.

If you want to recognize them correctly, you can acknowledge the physical characteristics of Siberian as follows;

They have large slanted eyes, look Asiatic, broad heads, and rounded ears that angle outwards. Their heads are broad and triangular, their muzzles are round, and their faces are cute. Their body shapes are muscular, large, and stocky. They are big since the females of Siberian Cats weigh around ten to fifteen pounds and the males are around fifteen to twenty pounds in weight. Their fur is thick and they have triple coats, and this is the adaptation to harsh Siberian winters. They are virtually impervious to cold weather. Their pattern or fur colors vary. This is because, between different packs of the wild and licensed breeders, there is a lot of interbreeding. Brown tabby color is the most common color, others are tortoiseshells or stories. Ones that are brought straight from Russia have longer neck ruffs, plumed tails, and double coats. Usually, their front legs are shorter than their hind legs. Their paws are round and big, they can move easily in the snow. You may have heard that the Norwegian Forest Cat and Maine Coon are often related to the Siberian cats, they indeed have a large breed.

If you wonder about the Siberian Cat’s characteristics in their behavior, commonly they are as follows:

The Siberian cat is active and playful. People believe they are a strong athletic breed. They are attentive, loyal, and friendly. Siberian cats can greet you at the door, follow you, and take activities in anything that you do at your house. These cats are also reputed to be good lap cats. They like to go outdoors, especially in the winter as they thrive in low-temperature climates. Siberian cats can jump to a surprising distance vertically or horizontally. This contrasts with their stocky and heavy build. It is said these cats are dog-like, but somehow they’re still a cat. You won’t find them jumping and licking your face.

You may love the Siberian cats, however, some people may prefer the less outgoing cats. There’s no certain estimation of who will be interested in these magical animals. You may also love Somali Cats. 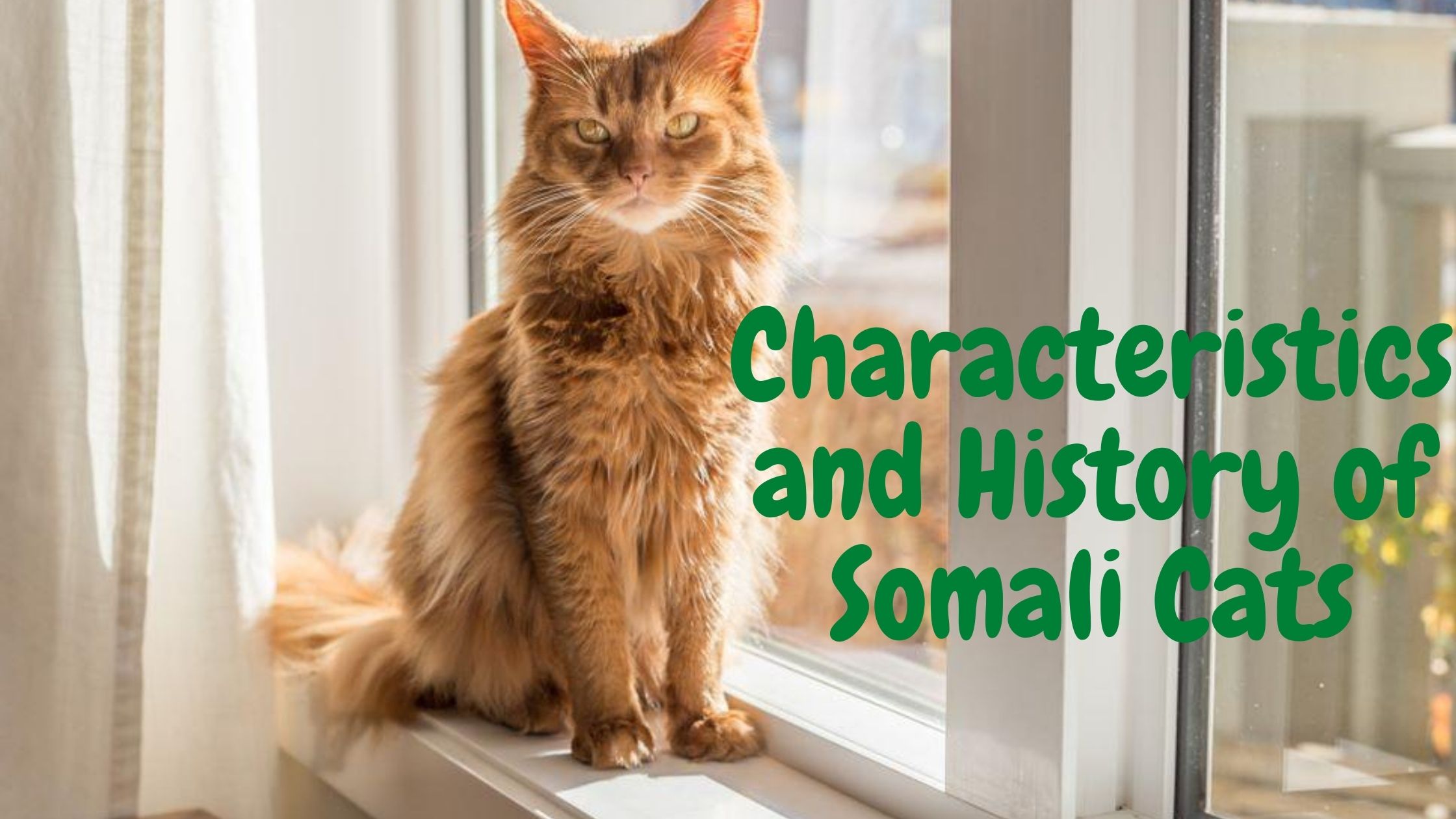 Somali Cats are called so according to the name of a region named “Somali” which is close to Abyssinia. From the year of 1920s until the 1930s, from a breeding program, this cat breed with semi-long hair appeared spontaneously. Some Abyssinian kittens had a tail with thick fur, fluffy like a brush, and long hair that covers their entire body.

The Long-hair gene is recessive (lost/covered) compared with the short-hair gene. At first, the long-haired cats were not recognized. Many breeders of Abyssinian did not want to admit some kittens they produce, which were long-haired, because they showed genetic impurity of their Aby cats.

Read about the Siamese Breed Here

To improve the stability of the genetic type of Aby cat, long-haired Aby cats were excluded from breeding programs and hidden. Then, in around 1960, some breeders in the United States developed this long-haired Aby and registered them as a separate cat breed called Somali cats.

Starting in 1978, Somali cats have been considered as one cat breed with stable genetic traits and have a distinct class in the cat contests held by the Cat Fanciers Association (CFA). In 1991, the Great Britain Cat Association approved and allowed the participation of Somali cats in cat contests. 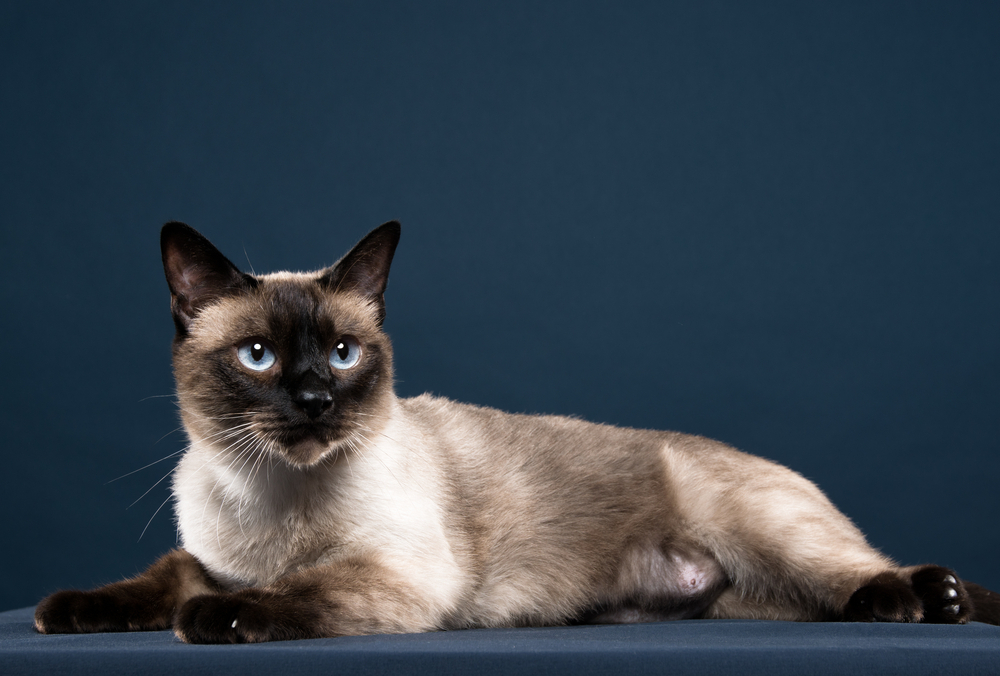 The Siamese cat is the most popular Shorthair breed in the world today. It has come a long way from the ancient city of Siam (now Thailand) to Britain & finally to America (this happened in the 18th century). These elegant cats were recognized for their blue blood right from their first days when they were kept as companions for the Siamese royalty.

The Siamese are notable for their large, beautifully shaped, and baby blue eyes. These are the major reason that the cat enjoys adulation and admiration. The hauntingly endearing eyes have been an inspiration for many a writer and poets.

Must Read: Learn how to Stop your Cat from Spraying

The Siamese cat is also renowned for its point-restricted coat pattern. Its body is of a light shade, while its face, tail, paws, and ears (the points) have dark hues. This occurs because of a pigmentation problem that the Siamese have been facing for centuries. Whereby the amount of pigment in the body is less than that contained in the points.

One can register a Siamese cat can into The Cat Fanciers Association only if it is in the colors of seal point, blue point, chocolate point, and lilac point. The CFA does not recognize any other color, for instance, red point, cream point, cinnamon point, fawn point, tortie point, lynx point, and tortie lynx point. However, many other organizations recognize Siamese cats.

Based on the length of their fur, the Siamese cats are classified into separate variations. The shorthair cat is the ‘original Siamese’. Balinese is another name for the Longhaired breeds. There is a third name given to the Balinese cats who come in colors other than the CFA-approved ones; those cats are then called Javanese. However, the Javanese is recognized as an extended version of the Balinese by all other organizations.

The classic Siamese is an elegant creature with a long, slender body, sharp-pointed ears, and a finely tapered tail. The traditional Siamese, sometimes called the ‘Apple head because of its rounded face, ‘ are more full-bodied and muscular, with rounded ears. It is the svelte variety of Siamese that usually draws all the attention and all the first-location ribbons!

The Siamese is an extremely social cat, with enhanced attention-seeking needs and an unnaturally loud and rasping voice. It is a highly intelligent creature that craves affection and activity. It cannot be left alone for too long. When treated well, the Siamese make great faithful companions.

Characteristics and History of Siamese Cats

Siamese Cats, which first appeared in England, were a gift to the ambassador of England at that time. Then, in the early 20th century, the cats were bred in the 19th century and appeared in various contests cats in the UK. As had been predicted, the Siamese cats have become popular in the UK and then Europe.

Feed your Siamese cats regularly, either canned or dry food. Two times a day or as much as they need it. Siamese cats almost never drink milk; thus, you should always provide a bowl of clean water for them. 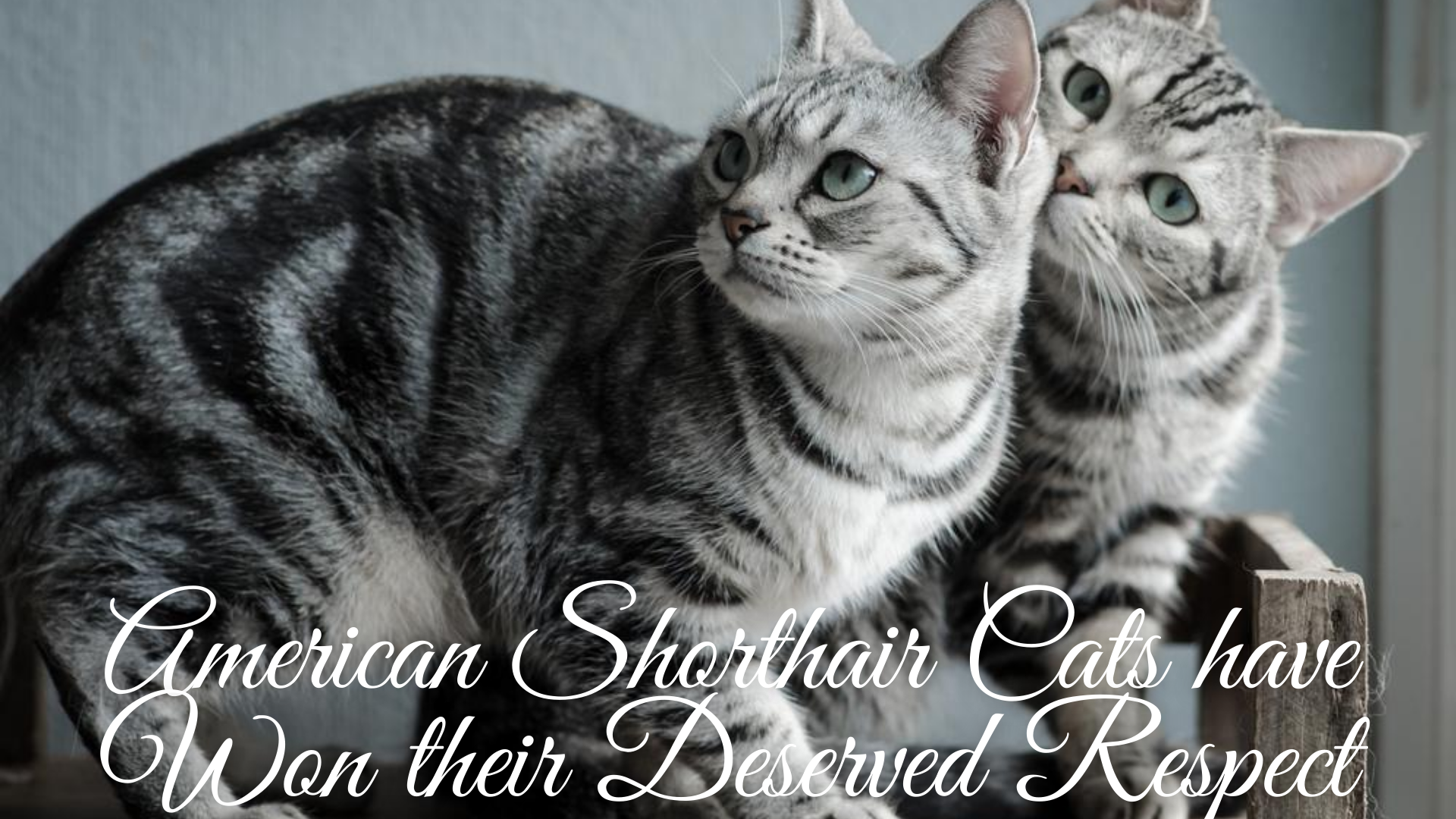 American Shorthair cats are the true-blue American felines. Although these cats fall in the purebred category, they are still the most common and randomly found cats in the country. Ironically, these cats were not given their due recognition and admiration until as late as the 1960s. People around the world saw them as the country’s cousins of the more fancy breeds.

It was only in 1965 that American Shorthair cats came to be popular and admirable creatures. This is after the Cat Fanciers Association, named a silver tabby male Most terrific Cat. For most Americans, the silver tabby with its attractive black markings is still the most outstanding-loved variety of Shorthairs even today.

Must Read: Learn How to Stop Cats from Spraying

The Shorthairs, with their traditional good looks and strong, thickset body, are quite popular among the average cat lovers. They have a strong, strapping frame with powerful chest and shoulder muscles and a strong jaw. They can decorate a fancy mansion as well as roam the dark streets equally well. The natural beauty of the American Shorthair cats, together with their vivacity, has added to their popularity. Another important quality of Shorthairs is that they are resilient and have an adaptable temperament.

However, American Shorthair cats are not much to cuddling and petting. They would much rather be in your company rather than on your person. This is because they are playful, yet quiet. The Shorthairs are trainable with little difficulty and make for very good social companions. You might also want to note that these cats get along well with kids and with other animals. Their loyalty is worth mentioning. The American Shorthairs are a breed of cats that hold human companionship in high esteem despite their independent nature.

There was a point time in the history of cats when breeds such as the Persian cats and Angoras lapped up the credit in terms of popularity and affection that American Shorthair cats deserved to win. The admission of these foreign breeds reduced the Shorthairs to a common house cat. Even though it had been close to for a longer time, the shorthairs had proof of their worth and loyalty. Fortunately, in the early 18th century, there began a selective breeding program to preserve the naturalness of the American Shorthair. And today this cat is a well-liked and well-accepted breed. It has also earned its spurs as a loving and loyal companion.